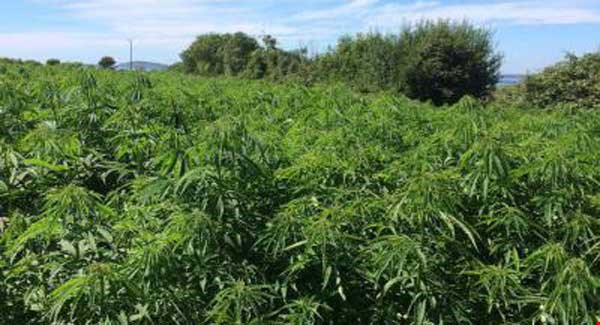 A north Kerry organic farmer has taken it upon herself to go through the process of getting a licence to grow hemp.

Kate Carmody’s hemp in north Kerry, grown in an attempt to rejuvenate a waterlogged field.

Kate Carmody first saw hemp growing on a farm while travelling around Europe as part of an EU- funded project called Trade It.

“What I liked was that it appeared to be very environmentally friendly. I have a field that’s very waterlogged. I needed a cover crop that would rejuvenate the land and produce a yield.

“It was all rushes, a real quagmire on four acres. So I needed something to cover the weeds and break the substructure. I could have put in grass for silage, but I’ve loads of grass. So I looked to hemp.”

It’s quite a long winded and unwieldy process to get started.

“I have a contract from the International Hemp Builders Association, you need a contract to begin. So this hemp is grown for fibre.”

Though it’s an agricultural product for the building trade, the application process to grow hemp does not go through the Department of Agriculture.

Instead, Carmody had to go through an agency called the Health Product Regulatory Authority (HPRA) – formerly Irish Medicines Board.

Her hemp is the same plant as cannabis, which is a “controlled substance”, but with less than 0.2% THC (tetrahydrocannabinol), and is legal to grow, albeit with restrictions.

The crop cannot be visible from the road, and that has to be proven in advance, via mapping. Carmody also had to get Garda clearance.

Once all documentation was submitted, the process (it’s rare enough, with hardly anyone else growing the crop) still took some time. But her licence arrived in late May, and planting began.

Just under four acres are in hemp, which should yield five to six tonnes of dry matter per acre. For this 96 kg of the seed was planted.

Then there was a drought, with a rare run of sun.

However her coastal location kept the plant alive, with a sea mist most mornings. Once the rain came, the crop grew rapidly. It’s already over six feet tall.

“The building company came over and were very impressed with it, they said it was a superb crop.” And soon it will flower. Then the Kerry farmer will have organic hemp seed, a very rare commodity.

Before harvesting a process known as retting occurs — essentially the weakening of the cell tissues, to separate the fibres from the stem. After this, a cover crop will go in for the winter.

“I’ve had no issues with growing it, I’m amazed by it. Every time you turn your back, it’s growing! So far, it seems ideal for an organic system, as it doesn’t need fertiliser.

“Once ground is well nourished, good P and K content, good lime levels, any good ground will grow it. It also doesn’t need pesticides or herbicides.”

“As it’s a new crop, planted for the first time, I’ll have to see what kind of after-grass I get. I’ll be putting in forage rye to cover the ground, then I’ll put grass in, so I’m interested to see if the rushes come back.

“It may be a solution for this part of the world. We have difficult land in this region, lots of reseeding is needed. A hemp industry could be very beneficial.”

The cumbersome process didn’t put her off.

“I like the challenge. It’s hard to get a licence, but I like challenging the system, it’s one of my favourite occupations in my old age.”

Another idiosyncratic Kerry character seems to be on her side.

Michael Healy Rae was quoted last week as saying “There needs to be a reasoned and sensible debate around the benefits of growing hemp, and the financial benefits for any growers.”

Thanks to one of his constituents, we have already moved past talk and into action.